All of the hullabaloo in the winter beer season is paid to potent lagers and warming ales. That is all well and good, but there remains a place for sprightly refreshing brews even at the height of the winter chill. We are proud to release today two such examples of thirst-quenching winter beer refreshment: Temple Garden Yuzu Wit and Winter Wit.

This fruit-infused Belgian-style witbier is the happy result of an unfortunate situation: we couldn’t get our hands on enough fresh yuzu fruit to brew this year’s Temple Garden Yuzu Ale (one of the annual mainstays of our fruit beer brewing). We decided to use what little yuzu fruit we did get in such a way as to maximize its impact — as a dry-peel component in a wonderfully fruity and effervescent wheat-based witbier. And boy does the yuzu aroma shine bright! It is complemented perfectly by the subtle aromatics provided by just a pinch of sansho seed.

Temple Garden Yuzu Wit is available for immediate release in kegs ONLY.

Witbier is a Belgian-style wheat ale brewed with a high proportion of un-malted wheat from which it derives a whitish color. Typically it is a light, tart, crisp and refreshing ale of low-alcohol strength. Baird Winter Wit is a more robust cold-season take on this classic Belgian beer style.

Our grist is a blend of un-malted and malted wheat, floor-malted Pilsner and Maris Otter, and a touch of Caragold (contrbuting body and color). The hopping is light and performed with a combination of European varieties: Tradition, Hersbrucker, Styrian Golding. The magic occurs when this ingredient combination is then fermented with our Belgian yeast strain. The result is a pleasantly tart and spicy, sprightly carbonated ale with a hazy white-gold hue upon which sits a billowing head of virgin-white foam. The warmth comes in the finish, just enough to furbish without interfering with the refreshment. Winter has never tasted so glorious!

Winter Wit is available for immediate release in kegs as well as bottles (360 ml). You can enjoy both Temple Garden Yuzu Wit and Winter Wit fresh on draught at all of the Baird Taproom pubs beginning today (Thursday, February 20).

Tomorrow is Valentine’s Day and we have crafted the perfect beer to celebrate this occasion of sweetheart love: Love Potion Lager.

Love Potion Lager is our version of a German-style Schwarzbier: a dark but delicately smooth bottom-fermented beer. The dark color stems from moderate additions of roasted malt to the grist which lend a subtle sweet-chocolate flavor. A long six-month lagering period has contributed to a clean and balanced roundness of character that is irresistibly seductive. Just a gentle kiss of hop flavor and bitterness in the finish will leave you in an expressive mood of tender love and heartfelt affection for that special someone.

Love Potion Lager is available in both kegs and bottles (360 ml) for immediate shipment from our Numazu brewery. It begins pouring from the taps of our Baird Taproom pubs on Valentine’s Day, Friday, February 14.

We are proud, for the ninth consecutive year, to announce the release of a most special winter-warmer ale: Ganko Oyaji Barley Wine.

The first batch of Ganko Oyaji Barley Wine was brewed back in Summer 2004 and released in February 2005. We have repeated this ‘brew-it-in-summer-for-release-next-winter’ schedule for Ganko Oyaji every year as it allows ample time for post-packaged secondary fermentation and flavor maturation — critical to beers of extremely high original gravity and alcohol strength.

Ganko Oyaji 2014 is brewed with an all-English malt bill that includes floor-malted Marris Otter, Rye, Amber and a touch of Roast Barley. A Kettle addition of Japanese red cane (akato) sugar contributes extra food for yeast fermentation without adding more in the way of body and sweetness — there is plenty of both of those in this high original gravity ale (23.9 Plato). The malt sweetness is balanced beautifully by generous additions (90 calculated IBUs) of five American-grown hop varieties: Millenium, Nugget, Sorachi Ace, Chinook and Simcoe. As always, we krausen (blending of a portion of peak fermentation beer into the beer destined for packaging) at packaging to produce a robust secondary fermentation and totally natural carbonation.

Ganko Oyaji is an ideal after-dinner or before-bed restorative. It promises to condition nicely for months and years to come. It is available for immediate shipment (bottles and kegs) to Baird Beer retailers throughout Japan. It begins pouring from the taps of Baird Taproom pubs on Saturday, February 1.

We are pleased, for the twelfth consecutive year, to announce the release of a now iconic Baird Beer winter seasonal: Carpenter’s Mikan Ale.

The mikans used in this brew are fresh, succulent, and local — harvested on the Heda land and by the hand of our carpenter friend, Nagakura-san. The Baird brewers hand-process the harvested mikans, shaving off the outer skin of the peel and pressing the juice. Both peel shavings and juice are added to the brew during wort production and before fermentation. The mikans serve to add depth and complexity to an already sumptuous ale; their role is to complement, not dominate.

Once again the character of this year’s version is marked most notably by the succulent aroma and piquant flavor of sweet-tart mikans and their wonderfully symbiotic interaction with our selected hop varieties (Summit, Citra, Centennial, Cascade).

The Carpenter’s Mikan Ale is available for immediate release in both kegs and bottles (360 ml). It begins pouring at our Baird Taproom pubs tonight (Thursday, January 23). If you visit our Fishmarket Taproom in the coming days, you likely will find the Carpenter perched on his counter stool sipping his namesake ale. Be sure to say ‘hello’ and ‘thank you.’

Experimentation in brewing is one of the great joys, and perks, of being a craft brewer. Recently, it is the Belgian Witbier style that has captured my attention and become the focus of some of our experimental brewing. My keen interest in the style is an outgrowth of three facts: (1) our house Belgian ale yeast has a Witbier pedigree, (2) the key grain used to brew Witbier, raw wheat, we are able to source in Japan, and (3) I enjoy drinking the style.

Today we are pleased to release our most recent iteration on the Witbier style: Shikoku Wit.

‘Wit’ means ‘white’ which characterizes the hazy milk-hued color of this wheat-brewed ale. 25% of our grist is raw wheat grown in Kagawa prefecture on the Japanese island of Shikoku. The proteins from the raw wheat interact with the unfiltered resident yeast to produce the milky white color. The wheat also contributes a wonderfully zesty and tangy flavor. Shikoku Wit is very lightly hopped, as Witbiers tend to be, just enough to promote a good flavor balance. Unlike most Witbiers of today, Shikoku Wit contains no spices or fruits. The bright fruity flavor is delivered as a courtesy byproduct of fermentation by our Belgian Witbier yeast.

Shikoku Wit is available for immediate release in both bottles (360 ml) and kegs. It begins pouring from all Baird Taproom taps tonight (Thursday, January 16).

Mori No Biru which iathe brewery of Gotemba Koogen Beer Company owned by the Yonekyu Company in Gotemba City does produce some seasonal brews in the craftbeer fashion!

The company for all its big size is still new as it was founded in 19797!

The regular beers are not craftbeers but this one is! 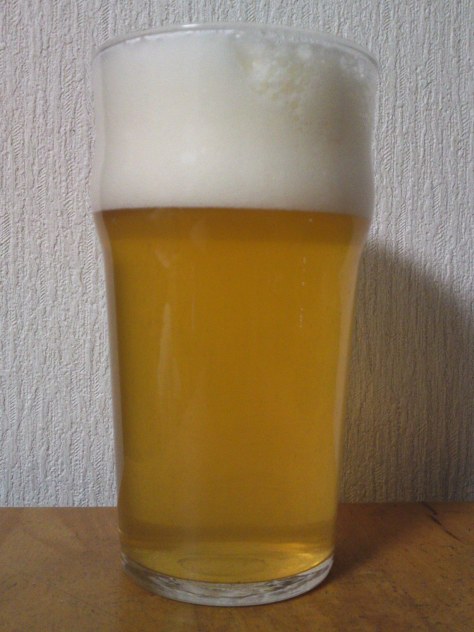 Overall: Thirst-quenching but better than average such beers.
Satisfying. To be enjoyed with snacks!

Happy New Year! 2014 promises to be an eventful year at Baird Brewing as we move into our new brewery home in Shuzenji later this spring. We also are undertaking major redesigns of our website, e-shop and newsletter. These changes will be unveiled also in the spring. One thing that won’t be changing is our classic winter seasonal ale: Dark Sky Imperial Stout.

This foreboding stout is a beer lover’s winter dream. It is pitch-black in color, unctuous in body, elusively complex in flavor, warming in alcohol and piquantly hoppy. If you want to take the nip out of winter, this is your brew!

Dark Sky Imperial Stout is available for immediate release both in kegs and bottles (360 ml) and is now pouring from the taps at each of our Baird Taproom pubs.